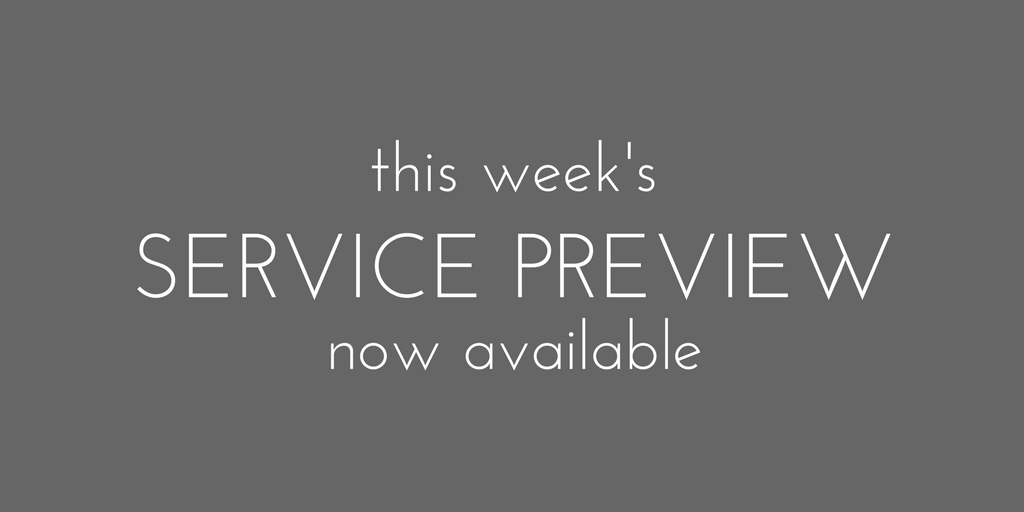 Hallelujah! My soul, praise the Lord.

I will praise the Lord all my life;
I will sing to my God as long as I live.

Do not trust in nobles,
in a son of man, who cannot save.

When his breath leaves him, he returns to the ground;
on that day his plans die.

Happy is the one whose help is the God of Jacob,
whose hope is in the Lord his God,
the Maker of heaven and earth,
the sea and everything in them.

He remains faithful forever,
executing justice for the exploited
and giving food to the hungry.

The Lord frees prisoners.
The Lord opens the eyes of the blind.
The Lord raises up those who are oppressed.
The Lord loves the righteous.
The Lord protects resident aliens
and helps the fatherless and the widow,
but he frustrates the ways of the wicked.

Our Sung Call to Worship
How Great Is Our God

Our Spoken Confession
Based on Psalm 146

Lord, we confess that we have failed to praise you
as our King.

We have sought security in earthly kingdoms and
trusted in mortal rulers.

We have not found our happiness in your help;
we have not hoped in your execution of justice.

We have not fought for justice to be done on earth
as it is in the kingdom of heaven:

We have not defended the rights of prisoners.

We have not sought wholeness for the broken.

We have not raised-up the oppressed to dwell
with us in our places.

We have not protected the alien seeking refuge
in our land.

We have not frustrated the plans of the wicked.

Lord, you reign forever. We can never escape your
justice.

Reign over us with mercy, forgiveness, and
transformation.

Our Sung Confession
I Am Ashamed

Assurance and Peace
We profess our assurance of salvation and peace in Christ through both responsive reading and song.
Remember the Gospel
From Revelation 7:9-17 (NIV)

After this I looked, and there before me was a great multitude that no one could count, from every nation, tribe, people and language, standing before the throne and before the Lamb. They were wearing white robes and were holding palm branches in their hands. And they cried out in a loud voice:

“Salvation belongs to our God, who sits on the throne, and to the Lamb.”

“Amen! Praise and glory and wisdom and thanks and honor and power and strength be to our God for ever and ever. Amen!”

Then one of the elders asked me, “These in white robes—who are they, and where did they come from?”

And he said, “These are they who have come out of the great tribulation; they have washed their robes and made them white in the blood of the Lamb. Therefore, they are before the throne of God and serve him day and night in his temple; and he who sits on the throne will shelter them with his presence. Never again will they hunger; never again will they thirst. The sun will not beat down on them, nor any scorching heat.

For the Lamb at the center of the throne
will be their shepherd;
he will lead them to springs of living water.
And God will wipe away every tear from their eyes.”

Our Sung Profession of Assurance
Before the Throne of God Above

We Give Thanks by Giving
We give financial offerings to support the work of the church because of our gratitude to God. By giving we confess we are trusting in God’s provision for us as well.
On the first Sunday of each month we have two offerings—one for the general fund and a second one for the benevolence ministry of our church.

We Give Thanks in Song
Salvation Belongs to Our God

45 And he entered the temple and began to drive out those who sold,46 saying to them, “It is written, ‘My house shall be a house of prayer,’ but you have made it a den of robbers.”
47 And he was teaching daily in the temple. The chief priests and the scribes and the principal men of the people were seeking to destroy him,48 but they did not find anything they could do, for all the people were hanging on his words.

1 One day, as Jesus was teaching the people in the temple and preaching the gospel, the chief priests and the scribes with the elders came up 2 and said to him, “Tell us by what authority you do these things, or who it is that gave you this authority.” 3 He answered them, “I also will ask you a question. Now tell me, 4 was the baptism of John from heaven or from man?” 5 And they discussed it with one another, saying, “If we say, ‘From heaven,’ he will say, ‘Why did you not believe him?’6 But if we say, ‘From man,’ all the people will stone us to death, for they are convinced that John was a prophet.” 7 So they answered that they did not know where it came from. 8 And Jesus said to them, “Neither will I tell you by what authority I do these things.”
9 And he began to tell the people this parable: “A man planted a vineyard and let it out to tenants and went into another country for a long while. 10 When the time came, he sent a servant to the tenants, so that they would give him some of the fruit of the vineyard. But the tenants beat him and sent him away empty-handed. 11 And he sent another servant. But they also beat and treated him shamefully, and sent him away empty-handed. 12 And he sent yet a third. This one also they wounded and cast out. 13 Then the owner of the vineyard said, ‘What shall I do? I will send my Beloved son; perhaps they will respect him.’
14 But when the tenants saw him, they said to themselves, ‘This is the heir. Let us kill him, so that the inheritance may be ours.’ 15 And they threw him out of the vineyard and killed him. What then will the owner of the vineyard do to them? 16 He will come and destroy those tenants and give the vineyard to others.” When they heard this, they said, “Surely not!” 17 But he looked directly at them and said, “What then is this that is written: “‘The stone that the builders rejected has become the cornerstone’? 18 Everyone who falls on that stone will be broken to pieces, and when it falls on anyone, it will crush him.”
19 The scribes and the chief priests sought to lay hands on him at that very hour, for they perceived that he had told this parable against them, but they feared the people. 20 So they watched him and sent spies, who pretended to be sincere, that they might catch him in something he said, so as to deliver him up to the authority and jurisdiction of the governor. 21 So they asked him, “Teacher, we know that you speak and teach rightly, and show no partiality, but truly teach the way of God. 22 Is it lawful for us to give tribute to Caesar, or not?” 23 But he perceived their craftiness, and said to them, 24 “Show me a denarius. Whose likeness and inscription does it have?” They said, “Caesar’s.” 25 He said to them, “Then render to Caesar the things that are Caesar’s, and to God the things that are God’s.” 26 And they were not able in the presence of the people to catch him in what he said, but marveling at his answer they became silent.

This is the Good News of Jesus.
O come let us adore him!

Sending
Having heard and confessed the Gospel, we are sent into the world on mission in Christ, which we express in both song and spoken word.

Sending Song
Crown Him With Many Crowns

Go in peace and serve the Lord.